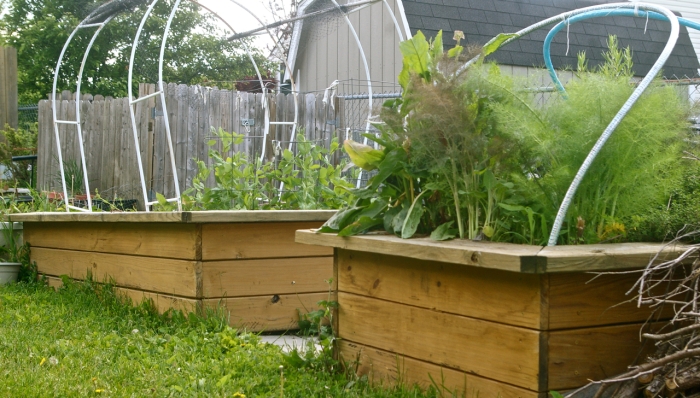 My wife and I, somewhat jokingly, call ourselves “urban farmers.” On our small suburban plot we have several garden beds, a few dwarf fruit trees, some grape vines, and blueberry bushes. We try to do everything organically and use heritage seeds.

If it were a business, it’d be a miserable failure. I’m sure we’ve spent more on buying plants and seeds, and on building the raised beds that are high and sturdy enough to use for seating, than any offset we get on the grocery bill. The planters I built are as much landscape architecture as they are garden beds.

Last year we planted some heritage popcorn seeds we got from the library’s seed exchange program. If you haven’t heard of this, some libraries have a program where you can “borrow” seeds for the growing season. Once the plants grow and the seeds mature, you collect some and take them back to the library.

Anyway, we planted heritage Seneca Red popcorn. Only a few plants came up and survived. (Young corn plants look an awful lot like grass, and I hadn’t been told they were planted there. My wife was very annoyed with me.) Came the fall, we got a few ears of corn and enjoyed a bowl of popcorn that we’d grown ourselves. A few kernels went into a bag to return to the library.

We didn’t get around to returning the seeds to the library until the next spring, but it was still early enough to sow them and have some ready by the fall. We were surprised, however, to find that the library wouldn’t accept them. The person at the library told us that if there’s another corn field within five miles it’s possible for that corn to cross-pollinate with our heritage seeds. Since we did not go to the extreme of covering the developing ears of corn and hand pollinating them with an artist’s brush, we weren’t able to guarantee that those seeds were still the heritage variety.

I see their point, but I wonder if something more is behind their reasoning. If they had happened to be cross-pollinated by a patented breed of genetically modified corn, it could become a legal issue for them, from what I understand. I hear that a number of farmers growing heritage, GMO-free corn have been put out of business when the patented genes blew on to their crops and cross-pollinated it.

What I don’t understand, is why is it that the farmer whose field was cross-pollinated by those patented genes is the one that’s at fault. Why is he the one that is sued in this case? If anything, it seems to me that it should be the other way around. After all, the crop of (formerly) heritage GMO-free corn is now less valuable, and that farmer has sustained a loss because of this. If any crop of patented GMO corn within five miles can do this, I don’t see how hardly anyone could grow heritage corn, certified GMO-free.

If I had a koi pond, and a neighbor sprayed insecticide on their plants, which then drifted on the wind to my pond and killed the fish, I’d think I’d have a valid complaint against them. However, if my neighbor’s corn crop cross-pollinates mine, making it less valuable, I would apparently be at fault for possessing the patented genes in my corn seed that my neighbor allowed to spread onto my crop without my permission.

How can that be right?