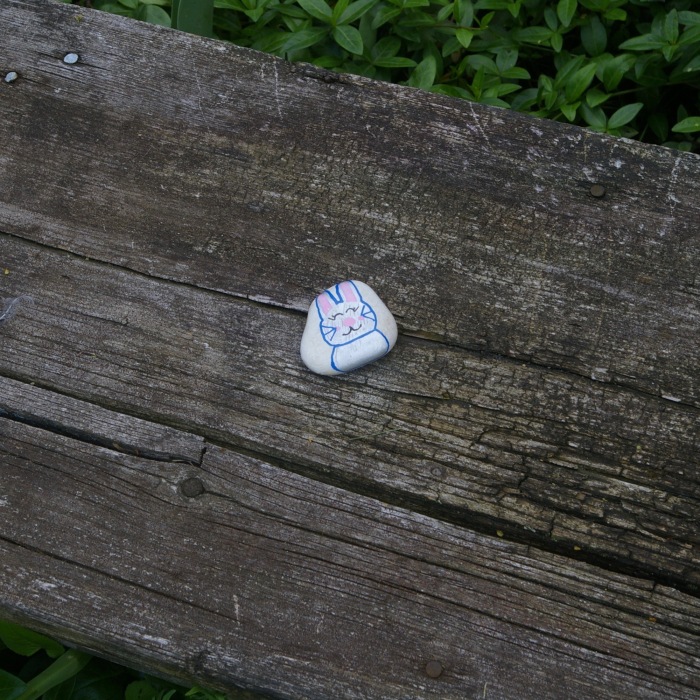 A few days ago someone left a small flat stone painted with a cartoon of a rabbit on the bench by my house. A few days later a similar one appeared on the pavers we’d set for the rubbish dumpster to rest waiting for the trash company to come empty it. This one was a picture of a butterfly.

I don’t know who left them, though judging by the artistic style, they’d been painted by the same person. I didn’t disturb them, and a few days afterwards they disappeared.

I rather like the mystery of this gift. It was unexpected, and therefore all the more welcome. It brought a smile to my face, something in itself welcome in these dark days. I don’t know if the person who left them there took them back, or if someone else walking by on the sidewalk picked them up and took them home. It doesn’t matter which, for if the original artist took them back I’ll assume they left those painted stones for someone else to enjoy. If a passerby took them, it’s obviously because they felt pleasure in seeing them, and wanted to keep that pleasure with them. I’m okay with it either way. The pleasure I received from them is already in my heart.

For some time since the pandemic hit I’ve been sitting outside my home on clear evenings playing music. Sometimes neighbors comment, and so far the comments have all been favorable. Occasionally passersby stop to listen for a while. Once I had a couple of young girls, maybe seven or eight years old stop and listen for several minutes. Keep in mind, I’m playing instrumental stuff, largely Renaissance era English and Irish music. John Dowland, Turloch O’Carolan, and such. Okay, O’Carolan is not technically Renaissance era, but I get away with it when I play the Ohio Renaissance Festival.

Anyway, after a bit one of them approached me an laid a flower on the bench beside me. I had to warn her to stay back, and for a moment I was afraid she was going to try to hug me. Even aside from the pandemic, that wouldn’t be a good idea in our paranoid society, especially since there was no obvious adult attached to her nearby.

I took the flower inside once I’d finished playing for the evening and put it in a vase. A daffodil. I kept it for at least a week, until it had faded and the petals had fallen off. One of my nicest gifts ever for playing music, even though it was a flower she had picked from my own garden.

Random Kindness, and Senseless Acts of Beauty. We need all of those we can get these days.

Check out my YouTube music videos at [email protected]